Close to 2500 young people of the Diocese of Kumbo flocked into St. Theresia’s Parish Sop for the celebration of the 21st World Youth Day. The ran from 8th to 9th April. Prior to the celebration parishes prepared the youths during the retreats held at various parishes on the World Youth Day message written by the Holy Father with the theme: “Your Word is a lamp to my feet and a light to my path”.

Participants started arriving at Sop as early as the evening of Friday 7 April.
By the evening of Saturday 8 April all the parishes were already present with 2499 registered youths. The number of unregistered youths could not be estimated.
After the visit they welcomed the Delegate of the Apostolic Administrator, Rev. Fr. Peter Watson, mhm. It should be noted that this was the very first celebration of this event in the Diocese of Kumbo without a Bishop.
In the evening the youths presented many activities reflecting the theme of the celebration. These activities ranged from a reflection of the Pope’s message, traditional dances, drama, and choral music.
On Sunday the Palms were blessed at St. Sylvester’s College, a procession was taken to the Church premises where the Holy Mass took place. The Passion of the Lord was the highlight of the day as this was the beginning of the Holy Week.
The World Youth Day is celebrated on Palm Sunday so that the youths can have a good reflection on the passion of Christ at their level.

On Friday 21st April 2006, the Archbishop of Bamenda and Apostolic Administrator to the Diocese of Kumbo, admitted six men into the Presbyteral College of Kumbo. The six Deacons, Rev. Denis Martin Njobam, Rev. Francis Bongajum, Rev. Justin Sefembiy, Rev. Polycarp Wirba, Rev. Sylvester Ngarba Nsah and Rev. Vitalis Tatah all hail from the Diocese of Kumbo. Apart from Rev. Tatah and Rev. Bongajum of the Order of Friars Minor-Capuchins, (OFM) the other four are Diocesan. This brings the presbyterium of Kumbo to 77.

In a homily by Bishop Bushu, he reminded the priests and lay faithful that “In the priest the office and the person merge in the mystery of the living Christ, the eternal high priest”). Heb 3:8.
A priest has no private life; if you are a priest, you are for everybody. And so you cannot sneak out somewhere and say no person is seeing us. If human beings do not see us, God is seeing us. “No person seeks the priesthood on his own. It is Jesus who chooses his priests as he did his apostles. He does this through the Church, his body, built on Peter and the apostles.”
The priest is called to witness on his word, to proclaim, to pronounce and to offer sacrifices. A priest is called to serve and not to be served. In a society marked by materialism and the quest for personal aggrandisement, the prelate exhorted the people to pray for their priests saying that the greatest gift any body could give to a priest is to remember them daily in prayer.
All other things we give them are secondary even if they are important. Addressing all those at the ceremony, the Chairperson of the Diocesan Laity Council, Kumbo, Mr. Chrysanthus Sala revealed that all six priests at some point or other were students of the now Government Bilingual High School Kumbo.
An important detail to be associated with this, is the fact that the Kumbo diocesan youth team at the time undertook visits to this and other non-Catholic schools within the diocese. Alluding to this, the chairman went on to specify that whenever a sound moral environment is created more vocations to serve the Church and the State are prepared.
Unfortunately, Moral Instruction at some point became an appendix on the lecture timetable of most of the Government Secondary Schools, consequently, the Diocesan Youth Team could no longer make these visits with the hope that Catholic Teachers in those institutions facilitate the Christian formation of Catholic students in these schools.
The ordination ceremonies brought together a cross-section of the faithful, civil and traditional authorities. The officiating prelate, Archbishop Cornelius Esua was assisted by Archbishop Antoine Ntalou of Garoua, Bishop Immanuel Bushu of Yagoua, the Provincial and representative of the General of the Capuchins, the Delegate of the Apostolic Administrator Fr. Peter Watson, the Rector of the St. Thomas Aquinas Major Seminary Bambui, Fr. Agapitus Nfon, together with 60 other priests and a permanent deacon from Canada.
It should be noted that the Diocese of Kumbo is principally made up of two administrative divisions Bui and Donga-Mantung even though Fonfuka sub division in Boyo division is administered to pastorally by the Diocese of Kumbo.
Bui Division is predominantly and area of Secondary evangelisation while Donga-Mantung is more of primary evangelisation. The road network in the diocese and its topography are not the best. The entire Ako sub division is administered by only two priests, who most times cannot reach all the villages in over six months.
During the very heavy rains, some of the villages cannot be reached by land owing to the thick mangroves and fast flowing rivers. More priests will increase the chances of some of these villages to meet the priests, who are not only their spiritual physician, but also their psychological and ontological doctor, their engineer, midwife and barrister.
In most of the villages, especially in the Donga-Mantung area the people depend more on the Church for almost every aspect of their lives.

The six candidates are from 4 of the 25 parishes in the Diocese of Kumbo; Mbve Parish, Tobin Parish, Melim, and Shisong.

More on this story after the ordination. 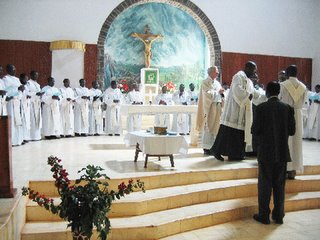 On Wednesday 5th April 2006, the entire Christian community and clergy of the Diocese of Kumbo converged at the St. Theresia’s Cathedral to celebrate the Chrism Mass. The Mass, which is traditionally celebrated in the morning of Holy Thursday, had to take place a bit earlier on account of the fact that Kumbo has no bishop yet. The Archbishop of Bamenda, Mgr. Cornelius F. Esua, who is also the Apostolic Administrator of the Diocese of Kumbo, could only create time for Kumbo during the fifth week of Lent.

Over 60 clergy of the Presbyterium of Kumbo concelebrated at the Mass. In the last few years, the Presbyteral Council of the diocese decided that the animation of the Chrism be taken over by the deaneries.
This was to increase the participation of the lay faithful, who hitherto received very few of them, mostly from the parishes around Kumbo urban area. Since that decision, deanery after deanery has taken up the animation of the Mass. The enthusiasm with which the deaneries have participated in the Mass has been highly encouraging.
The animation this year was done by the Tatum deanery. The Diocese of Kumbo is made up of six deaneries; Kumbo, Nkar, Tabenken, Djottin, Tatum and Nkambe. Highlights of the Mass included the renewal of the commitment to the Priestly Ministry by the priests and blessings of the Oil of Catechumen and the Oil of the Sick, and the consecration of the Oil of Chrism.
The oils were symbolically carried to the altar by a catechist with the oil of the catechumens he usually prepares for Baptism, a nurse with the oil of the sick she cares for physically and a priest carrying the oil of Chrism with which he is anointed.
During the homily the Archbishop, amongst the many issues explained, gave a brief report of what happened during their Ad Limina Apostolorum (to the threshold of the tombs of the Apostles Peter & Paul) visit which ran from 12th to 21st March 2006).
After transmitting the greetings of the Holy Father, Pope Benedict XVI, to the Christians of Kumbo, he informed the faithful of his prayers for the People of Kumbo and the prayer of the Bishops of Cameroon for the People of Cameroon: “I prayed for all of you in a special way on the tombs of the Apostles, Peter and Paul, and particularly on the tomb of Pope John Paul II, the first anniversary of whose death was celebrated on Sunday 2nd April 2006.
I will like to inform you that the tomb of Pope John Paul II has become a place of pilgrimage. Thousands of people flock there everyday. There is no doubt that he loved Cameroon and on that tomb the Bishops of Cameroon made a special prayer to thank God for him and to ask him to intercede for all our Christians.”
Explaining the significance of the Chrism Mass, he said: “This celebration which is traditionally know as the Chrism Mass, centred on the priesthood and on the priestly ministry, which are the expression of God’s love for us. During this celebration we shall bless and consecrate the oils used for the administration of the Sacraments of Baptism, Confirmation and the Sacred Order through which we share in various degrees the one priesthood of Christ?.
We shall equally bless the oil for the administration of the Sacrament of the Sick. It is recommended that all the priests of a given diocese concelebrate with their bishop in order to express their communion as one priestly family i.e. as a presbyterium. We are celebrating our communion with Christ and with one another.”
After the Mass, the priests moved to Bishop’s House to collect the new oil back to their respective parishes and institutions.
April 15, 2006